Comprehensive valve performance management provides monitoring and service for valves throughout a process or facility. In a webinar George Buckbee, head of performance solutions at Metso Flow Control USA Inc., described how this can work.

Buckbee showed that the total cost of ownership for a typical control valve includes much more than just the cost of the valve itself (see table).

In his experience, Buckbee said, about 30% of control valves have some kind of mechanical issues in the application where they are used. A valve might be too big—running at 2% to 3% of capacity all the time, which doesn’t allow for much control. A valve could be too small, so it needs to run at 100% open all the time, not allowing for any flow control at all.

Another problem might be that a valve is sticking—has “stiction,” a combination of sticking and friction. It cycles back and forth under control, wearing the valve parts (seals, packing and the valve itself) unnecessarily. This would reduce the valve’s lifespan, which impacts reliability. Stiction also can have a harmful effect on the process. As the valve hunts back and forth it changes the flow to the process. Stiction can often be easily remedied by, for example, adjusting the tightness of the packing and doing some simple maintenance on the valve, such as checking the air supply and whether the ports are plugged.

Such problems can affect one or more potentially costly aspects of valves or the process they serve: life span, reliability or process quality and production.

How does a company keep track of these problems? Since the digitization of controls, a lot of data is available already. However, most plants in the process industries are not effectively using their data, Buckbee said. Data from smart positioners or even analog data can prove valuable. Studies have shown that less than one-half of one percent of the data available in manufacturing companies is being analyzed or at least looked at to determine trends.

Tools: Use tools, primarily software, to gather and examine data about the valves and their performance and also the process variables. These tools are important but they’re not the whole story, Buckbee said. Somebody needs to use the software and do something with the data.

Organization and skills: The next requirement is people. They need to be organized and provided structure in a way that enables them to use the tools and make the right decisions. There is no prescription for any of this, Buckbee said. Every plant is different.

Best practices and work flows: Who should be looking at the tools and how often? What should they do with the information? The way things happen in plants may be haphazard—an operator may log a problem, but the information may or may not make it to the person who can do something. “It’s about consistency and follow-through to make sure the right information gets to the right person at the right time,” Buckbee said.

When the various parts of a valve performance management system work together, problems are discovered and dealt with in a timely manner, preventing unexpected shutdowns, prolonging valve life and improving the plant’s processes. Buckbee gave some examples.

In an oil refinery, a valve that was known to have previous issues was demonstrating a lot of movement around its commanded position, plus/minus 10%. This produced a fluctuating process flow rate (Figure 1). The solution was to retune the control loop and make a small adjustment to the positioner. The result was less valve movement, a steadier flow rate and extended valve life (Figure 2). The valve itself did not need to be repaired or replaced.

In a pulp mill the monitoring software automatically detected that a valve was continually oscillating, producing abrupt changes in the flow through the valve, above and below the desired level. This behavior is characteristic of a sticky valve, Buckbee said. However, in this particular case, in addition to the valve being sticky, a leak in the actuator diaphragm was discovered. Both the valve and actuator were replaced at the next plant shutdown. Afterward, the valve control and the resulting flow were much smoother. “Much better for the valve and much better for the process,” Buckbee said.

An engineer examining the data from a smart positioner noticed there was a drop in the load for opening the valve (Figure 3). It’s counterintuitive that this would be a problem, Buckbee said, as one might normally look for an increase in the load to indicate a valve is damaged. Here, however, the drop indicated a problem with the valve seat. Examination of the valve showed some of the valve seat had eroded away (Figure 4). This resulted in the lower force needed to open the valve. The diagnostics used for this valve came from a smart positioner that provided data not only about the valve position, but also about the air supply and the load needed to open and close the valve. Repair or replacement could be performed before a failure occurred. 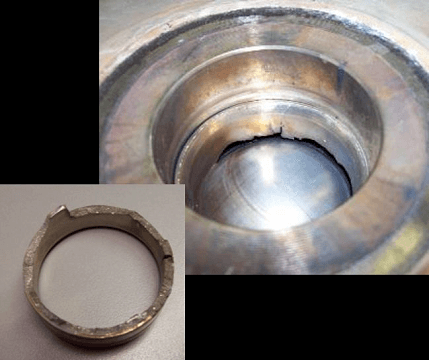 Monitoring software detected a problem with a sudden increase in the amount of valve movement (Figure 5). Inspection revealed that the actuator was barely bolted on. Of the four bolts holding the actuator onto the valve, two had loosened up entirely and the other two were partially loose. The actuator was working itself off of the valve. If the problem had not been detected, the actuator could have fallen off entirely, leaving the valve in whatever position it happened to be in. The solution to the problem was simply to secure the bolts, including applying a thread-locking adhesive. 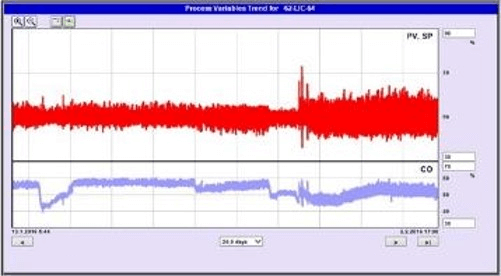 In a similar case at another plant, the actuator did fall off the valve and cause a shutdown, Buckbee said. The plant manager went to the staff who had access to the monitoring software to find out why this happened. It turned out that the monitoring software had flagged this valve as the number one problem in the plant for two weeks. Nothing was done because work plans and procedures were not in place for someone to be paying attention and doing the follow-up activity.

As the examples show, collecting the data is important, but so are interpreting it in a timely fashion and having work processes in place to make sure problems are corrected.

In his experience, Buckbee said, “in large plants with hundreds to thousands of control valves that put the three parts of valve performance management in place, the benefits have been on the order of millions of dollars or euros, in terms of avoided shutdowns and increased production rates.” The numbers are significant, especially when compared to the cost of implementing valve performance management programs, which is a fraction of the achievable savings and improvements.