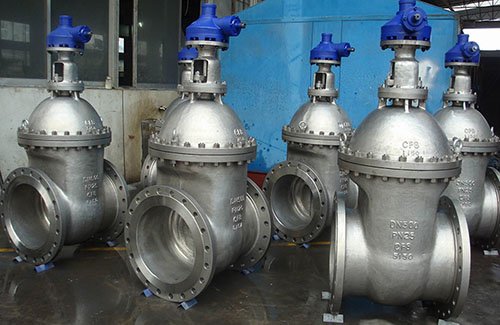 One of the duties of most valves is to provide a fluid seal between the seat and the closure member. If the closure member is moved by a stem that penetrates into the pressure system from the outside, another fluid seal must be provided around the stem. Seals must also be provided between the pressure-retaining valve components. If the escape of fluid into the atmosphere cannot be tolerated, the latter seals can assume a higher importance than the seat seal. Thus, the construction of the valve seals can greatly influence the selection of valves.

Four broad classes of fluid tightness for valves can be distinguished:

Gas leakage rate 10−3  to 10−5  µg/s per meter seal length. In the United States, atom-class leakage is commonly referred to as zero leakage. A technical report of the Jet Propulsion Laboratory, California Institute of Technology, defines zero leakage for spacecraft requirements.

According to the report, zero leakage exists if surface tension prevents the entry of liquid into leakage capillaries. Zero gas leakage as such does not exist. Figure below shows an arbitrary curve constructed for the use as a specification standard for zero gas leakage. 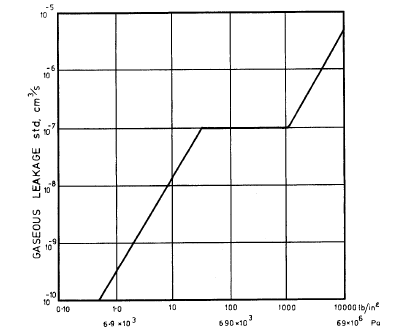 carried out with water, air, or inert gas. The tests are applied to the valve body and the seat, and depending on the construction of the valve, also to the stuffing box back seat, but they frequently exclude the stuffing box seal itself. When testing with water, the leakage rate is metered in terms of either volume-per-time unit or liquid droplets per time unit. Gas leakage may be metered by conducting the leakage gas through either water or a bubble-forming liquid leak-detector agent, and then counting the leakage gas bubbles per time unit. Using the bubble-forming leakage-detector agent permits metering very low leakage rates, down to 1×10−2 or 1×10−4 sccs (standard cubic centimetres per second), depending on the skill of the operator.

Lower leakage rates in the atom class may be detected by using a search gas in conjunction with a search-gas detector.

Operational wear is not limited to soft seated valves and it can be experienced with metal-seated valves if the process system is carrying a corrosive fluid or a fluid that contains particles.  Metal seatings are prone to deformation by trapped fluids and wear particles. They are further damaged by corrosion, erosion, and abrasion. If the wear-particle size is large compared with the size of the surface irregularities, the surface finish will deteriorate as the seatings wear in. On the other hand, if the wear- particle size is small compared with the size of the surface irregularities, a coarse finish tends to improve as the seatings wear in. The wear-particle size depends not only on the type of the material and its condition, but  also  on  the  lubricity  of  the  fluid and  the  contamination of  the seatings with corrosion and fluid products,  both of which reduce the wear-particle size.

The seating material must therefore be selected for resistance to erosion, corrosion, and abrasion. If the material fails in one of these requirements, it may be completely unsuitable for its duty. For example, corrosive action of the fluid greatly accelerates erosion. Similarly, a material that is highly resistant to erosion and corrosion may fail completely because of poor galling resistance. On the other hand, the best material may be too expensive for the class of valve being considered, and compromise may have to be made.

Table below gives data on the resistance of a variety of seating materials to erosion by jets of steam. Stainless steel AISI type 410 (13 Cr) in heat-treated form is shown to be particularly impervious to attack from 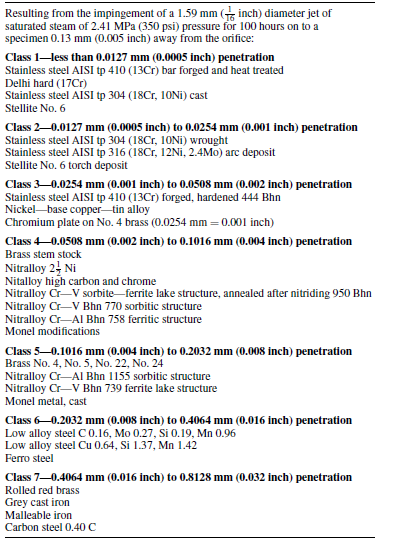 steam erosion. However, if the fluid lacks lubricity, type 410 stainless in like contact offers only fair resistance to galling unless the mating components are of different hardness. For steam and other fluids that lack lubricity, a combination of type 410 stainless steel and copper-nickel alloy is frequently used. Stellite, a cobalt-nickel-chromium alloy, has proved most successful against erosion and galling at elevated temperatures, and against corrosion for a wide range of corrosives.

Certain valves have the facility to periodically introduce sealants into the valve seat and stems to maintain an effective seal over an extended period. The leakage passages between metal seatings can be closed by sealants injected into the space between the seatings after the valve has been closed. One metal-seated valve that relies completely on this sealing method is the lubricated plug valve. The injection of a sealant to the seatings is used also in some other types of valves to provide an emergency seat seal after the original seat seal has failed.

In the case of soft seatings, one or both seating faces may consist of a soft material such as plastic or rubber. Because these materials conform readily to the mating face, soft seated valves can achieve an extremely high degree of fluid tightness. Also, the high degree of fluid tightness can be achieved repeatedly. On the debit side, the application of these materials is limited by their degree of compatibility with the fluid and by temperature.

A sometimes unexpected limitation of soft seating materials exists in situations in which the valve shuts off a system that is suddenly filled with gas at high pressure. The high-pressure gas entering the closed system acts

like a piston on the gas that filled the system. The heat of compression can be high enough to disintegrate the soft seating material.

In designing soft seatings, the main consideration is to prevent the soft seating element from being displaced or extruded by the fluid pressure.