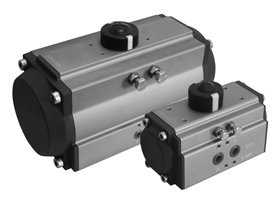 Rotary Actuators: Different Mechanical Styles
There are 2 main styles of rotary pneumatic actuators for use on ball, butterfly and plug valves: Rack-n-pinion, and Scotch Yoke. While at first they may appear drastically different, they are actually quite similar. Both operate by converting the linear motion of a piston in a cylinder into rotational motion of the stem drive. 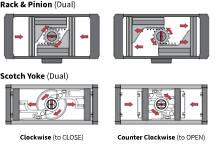 Both are available in dual (shown above) and single versions and both can be spring return or direct acting (sometimes referred to as single acting and double acting).

There is also a 3rd style of pneumatic rotary actuator that is older and far less common - Vane. In this type of actuator the piston is replaced by a vane, which is fixed to the stem drive. The vane is enclosed in a wedge shaped chamber where the stem center is located towards the point of that wedge. Air is forced into this chamber on either side of the vane in order to move it, thus rotating the stem drive.

Double Acting
Double acting pneumatic actuators require air to be used to move the piston in either direction. A solenoid valve is used to control the air flow into and venting of the actuator. Since there is no spring force to overcome, a smaller actuator can often be used.

Both Vane and Rack-n-pinion style double acting actuators have an constant, linear torque output throughout the stroke in both directions. Scotch yoke actuators, due to their mechanics, produce curved torque outputs that are identical on one stroke direction vs. the other.

Spring Return
Spring return pneumatic actuators use compressed air to move the piston in one direction, and a spring to push it back in the other when the air is stopped and allowed to vent. This requires a larger actuator since it has to overcome the force of the spring in addition to providing enough torque to operate the valve.

The most important aspect of a spring return actuator is that it offers a "fail-safe" position. This means that if the air supply is lost, or electric power to the solenoid that controls the air is lost, the valve will travel to this position using the force of the spring(s). This could be either open or closed, whichever offers a safer outcome.

Both Vane and Rack-n-pinion style spring return actuators have a descending, linear torque output throughout the air stroke and spring stroke. The slope of the line is caused by the spring force increasing and decreasing as it compresses and expands. Scotch yoke actuators, due to their mechanics, produce curved torque outputs that are inverse on one stroke direction vs. the other.

Also you can see: control valve