What is an Actuated Valve?

What is an Actuated Valve?

A valve is a component in a piping system that is used to control the flow of the media through the system. This control is achieved by the manipulation of some type of obstructer within the valve. Actuated valves use mechanical devices called "actuators" to operate the valve using a power source such as compressed air or electricity. Most actuated valves are also available in a manually operated version, or as an actuated valve with a manual override.

All of the most common types of automated valves fall into one of three main categories. They are linear, rotary, and self-actuated. There are a variety of valve types within each of these categories each having its own benefits. This training course is focused on rotary and linear actuated valves.

Rotary Valves (also referred to as “quarter-turn” valves)
These types of valves rely on the rotary motion of the flow obstructer In most cases this rotation is limited to 90 degrees (one quarter-turn), however, there are valves that operate using a larger degree of rotation and have more than 2 positions that are used in regular operation. Valves that are truly quarter-turn are completely closed at 0˚ and completely open at 90˚. Examples of quarter-turn valves are ball valves, plug valves, and butterfly valves.

Linear Valves
There are 2 distinct types of linear valves: rising stem (multi-turn) and axial. While both valve types rely on the linear motion of the flow obstructer, they are very different in construction and operation.

Multi-turn rising stem valves move the obstructer by the rotation of a threaded rod (stem) which is attached to the obstructer Examples of multi-turn valves are gate valves, globe valves, pinch valves, diaphragm valves, and needle valves. These valve types are commonly used for flow control applications.

Axial valves use pneumatic or electro-magnetic force to slide the obstructer along an axis. Some examples of these are coaxial valves, and angle seat valves. These valves are typically fast acting and only used for on/off process applications.

Ball Valves
Quarter-turn 2-way ball valves are by far the most common type of process control valve. They are 2-way (inlet and outlet), 2-position (open and closed) valves that are used for shut-off or isolation of a system, or a loop or component within a system. The basic construction of a ball valve includes a ball as the obstructer which is sandwiched between two cup shaped seals referred to as “seats”. Typically the ball has a bore straight through it. Media flows through this bore when the valve is open. When the ball is rotated 90˚, the flow of media is stopped by the sides of the ball which now completely fill the opening in the seats.

Ball Valves are best suited for on/off applications. Throttling is possible, but not an ideal use for most standard ball valves. Specialty ball valves are available for throttling.

Plug Valves
The basic construction of a plug valve is practically identical to that of a ball valve with the exception of the shape of the obstructer used. In this case, the ball is replaced by a slightly tapered cylinder. This cylinder has a bore through it just like a ball valve, and it operates the same way where it is open in one position, and closed when rotated 90˚.

There are advantages to plug valves that make them the preferred choice in certain applications. One is that they contain no voids or cavities in which media can get trapped. Another is that they can be adjusted to fix leaks that may develop over time, where as a ball valve would need to be repaired or replaced.

Like ball valves, plug valves are typically used for on/off applications. Plug valves are often used in extreme service applications such as refineries and chemical plants, where the environment of use is corrosive.

Butterfly Valves
In contrast to ball and plug valves, butterfly valves use a disc shaped obstructer. Basic, general duty butterfly valves are called "resilient seated". They have a single seal ring that acts a a seal between the valve body and disc, as well as the seal between the pipe flanges and valve body. When the disc is perpendicular to the direction of flow, the flow is stopped. When rotated 90˚ the flow goes through the valve by traveling around the slim profile of the disc.

Butterfly valves are commonly used on larger pipe sizes where a ball or plug valve would get very large, expensive, and heavy. Butterfly valves also function rather well as a flow control valve or an on/off valve. If a manual actuator is used in a flow control application, it must lock into place, so that the force of the fluid does not rotate the disc in either direction. Most manual butterfly valves do incorporate this feature.

Gate Valves
A gate valve functions by moving a wedge shaped disc obstructer up and down to open and close the flow path through the valve. This linear motion is provided by a threaded rising stem. Turning this threaded stem requires multiple revolutions (multi-turn) to travel from open to closed. The number of revolutions required is usually the valve size in inches x 3 + 2. So a 6 inch valve will require 20 turns of the stem [(6 x 3) + 2 = 20]. They should only be used for on/off applications as throttling for an extended period of time will damage both the obstructer and seals. Use of a gate valve for throttling is also not very effective since most of the reduction of flow will increase in the last 10% of closure. 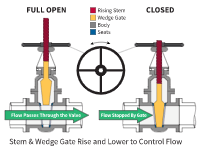 Globe Valves
Globe valves operate by having a convex disc shaped plug raise and lower via a rising stem into a circular seat around the inside of the globe shaped body at the “equator”. The flow enters the “lower hemisphere” from one side, then travels up through the seat and exits through the outlet on the opposite side of the “northern hemisphere”. Globe valves are suitable for both on/off and throttling applications. There are 2-way globe valves that are a preferred choice for precise flow control and 3-way globe valves that are commonly used for mixing media from two inlet ports and directing that mixture through an outlet port.

Needle Valves
These are very similar to a globe valves with 2 main differences. One, they are smaller and for finer control of flow on smaller lines. Two, instead of a disc shaped plug, they use a “needle” which has a conical shape, and moves in and out of an orifice. While effective as an on/off valve, these would not be the best choice. Needle valves are meant for fine throttling flow control. 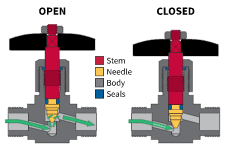 Solenoid Valves
Solenoid valves operate using a linear sliding obstructer that opens and closes the valve, or changes the flow from one outlet to another. There are many different types of obstructers used including plunger, shuttle, spool, and diaphragm.

There are even proportional solenoid valves that can be used for flow control. In these valves, the coil moves the obstructer varying distances based on the voltage supplied to it.

Solenoid valves are relatively small. Their size is limited by the strength of the coil which is a result of the windings used to create a magnetic field when energized. In addition to the limit on strength of the coil, the flow paths and orifices in solenoid valves are rather small when compared to the line size. This limits flow and increases the pressure drop through the valve. 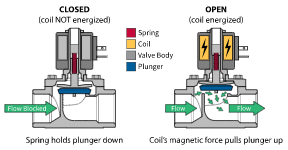 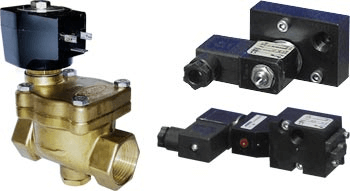 Common everyday applications include the water line on dishwashers and ice makers. In industrial valve automation, solenoid valves are also used to control the supply air to pneumatic actuators.

If a high flow rate or small pressure drop is required, solenoid valves are not suitable. Coaxial or angle seat valves are required.

Most solenoid valves consist of a valve body on which various coil types can be attached. The coils come in a range of voltages with a variety of connectors, and electrical protection ratings.

Coaxial valves use a shuttle type obstructer that the media travels through when open. This shuttle moves to one position or the other to perform its function, either on/off or diverting flow to the proper outlet. Coaxial valves have a much larger flow path compared to solenoid valves, but still do not come close to a full port valve. That being true, there is again a limit on flow and an increase in pressure drop. 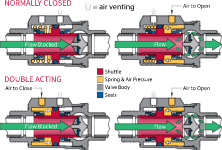 For many on/off applications coaxial valves would make a good substitute for a ball valve. Coaxial valves will provide a smaller valve that operates more quickly while a ball valve will have higher flow rates with lower pressure drops.

2- What is valve actuator